What's IAIDO IN YOUR HOUSE？

Recommend for people who...

Iaido will help with... 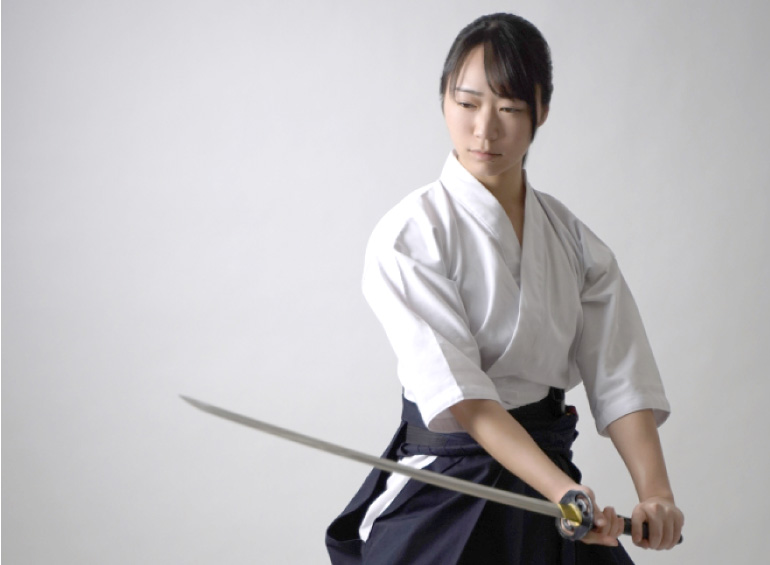 Semi-Master of Shinkageryu Association
After graduating from university, she devoted herself to the martial arts and became an Semi-Master of the Shinkageryu Association at a young age. She has been concentrated her energy on spread the material arts,such as to be a model for the cover and demonstration of the book "Women's Iaido Program" published by PE&Sports Publishing.
Her appearance that tell you how to live as “a person you want to be” by learning the techniques handed down from the samurai era has been introduced in magazines and TV, and has caused a great sensation.
She has also given lessons to various athletes, actors, and models, and has gained the confidence of specialists in various fields.

I have no previous experience in martial arts.

In this lesson, you will learn Iaido according to procedure that starts with basic exercises such as calisthenics. You will also learn how to move the body peculiar to Iaido, as well as how to swing the folding fan. The instructor will explain each step in details so please don’t mind even if you have never tried martial arts or you are not good at doing sports.

How you can I pay for the lesson fee ?

What do you need to prepare ?

Either your laptop, smart phone, or tablet device with ZOOM app and good internet connection is required for the lesson. Since the instructor wants to check your movement, during the lesson you will need to stand far you’re your device enough so ZOOM projects your entire body clearly. Two square meters of space is enough for you to take this lesson.

What kinds of items do I need ?

Please have something that's 20 cm to 30cm and a stick-shaped item such as folding fans, folding umbrellas or a core of plastic wrap to swing as a sword during the lesson. The way to swing each item would be slightly different from each other, so please try using various items as you like and find your preferred one. We recommend that you choose something that you can hold firmly.

Do I have to prepare training clothes (Dogi) for Japanese martial arts?

I have taken a Iaido lesson previously and have my own Japanese sword. Can I use it in this lesson?

For safety reasons, we are afraid that a Japanese sword is not allowed to be used in this lesson. However, if you are able to take our private lesson in a place spacious enough to swing your sword with no risk of hurting people around you, we would be happy to provide our lesson where you can use it. Please feel free to let me know if you would like further information regarding it.

I believe Japanese martial arts should be utilized by more and more people.

Learning Japanese martial arts does not immediately change something of you like you imagined before starting, however; you can surely get a sense of fulfillment in the way of learning it.

It would be a first step for learning Japanese martial arts and culture while enjoying taking this lesson at home!

I hope “IAIDO IN YOUR HOUSE” will help more people to live more actively and Japanese martial arts will spread to people all over the world.